Hurtling Down the Road to Serfdom by John Stossel 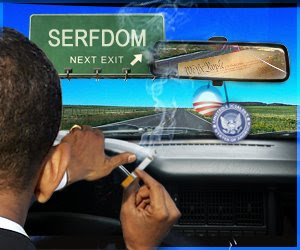 Government is taking us a long way down the Road to Serfdom. That doesn't just mean that more of us must work for the government. It means that we are changing from independent, self-responsible people into a submissive flock. The welfare state kills the creative spirit.

F.A. Hayek, an Austrian economist living in Britain, wrote "The Road to Serfdom" in 1944 as a warning that central economic planning would extinguish freedom (http://tinyurl.com/y9aelrn). The book was a hit. Reader's Digest produced a condensed version that sold 5 million copies.

Hayek meant that governments can't plan economies without planning people's lives. After all, an economy is just individuals engaging in exchanges. The scientific-sounding language of President Obama's economic planning hides the fact that people must shelve their own plans in favor of government's single plan.

At the beginning of "The Road to Serfdom," Hayek acknowledges that mere material wealth is not all that's at stake when the government controls our lives: "The most important change ... is a psychological change, an alteration in the character of the people."

This shouldn't be controversial. If government relieves us of the responsibility of living by bailing us out, character will atrophy. The welfare state, however good its intentions of creating material equality, can't help but make us dependent. That changes the psychology of society.

"The several states composing the United States of America are not united on the principle of unlimited submission to their general government; but by a compact under the style and title of a Constitution for the United States, and of amendments thereto, they constituted a general government for special purposes [and] delegated to that government certain definite powers and whensoever the general government assumes undelegated powers, its acts are unauthoritative, void, and of no force. To this compact each state acceded as a state, and is an integral party, its co-states forming, as to itself, the other party. The government created by this compact was not made the exclusive or final judge of the extent of the powers delegated to itself, since that would have made its discretion, and not the Constitution the measure of its powers." --Thomas Jefferson

Daryl
I am an avid defender of the Constitution and a conservative/libertarian/classical liberal. Some just call me a "Ron Paul Conservative." Most importantly, I am a Christian and a "Reformed/Calvinist" one at that.